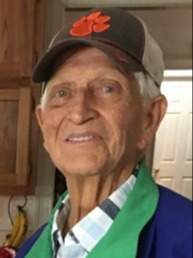 James William Ryan Chalmers (Jim) entered into heavenly rest on October 13 th , 2021. Born on March 11 th , 1936 to the late Ryan Young and Ila Taylor Chalmers. He graduated from Clemson University with a degree in Poultry Science.

Mr. Chalmers retired from ISE America and Chalmers Strawberry Farm, which he owned for 20 years. He was an active member of Smyrna Presbyterian Church where he served as an elder.

Jim was known as The Strawberry Man, The Chicken Doctor, and as Blue Eyes at the dialysis center.

Services for Mr. Chalmers will be held at 2:30 PM Saturday, October 16 th , 2021 at the McSwain-Evans Funeral Home Chapel by the Reverend Dan Ratchford and Rev. Creighton Jones following a visitation from 1:30-2:30 PM. Burial will follow at Newberry Memorial Gardens.