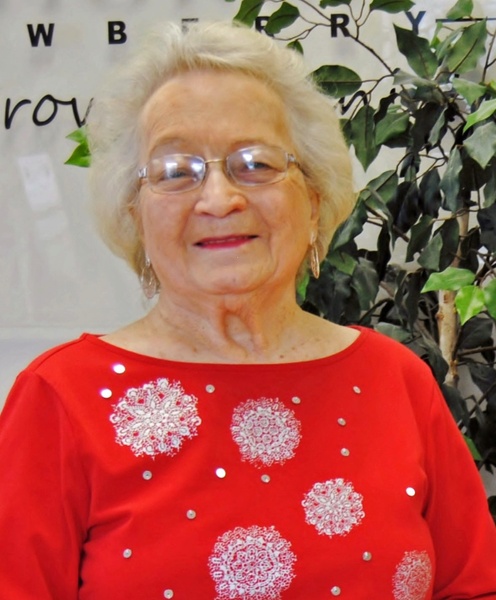 Born on December31, 1932, in Greenville, she was a daughter of the Andy Otto and Nannie Lola Jones Long.

Jean Briggs was a good and faithful wife, mother, grandmother and loyal friend.  She was always ready to help anyone with a need, especially those who were outside of the main group.  She made it a point to reach out and invite them in.

As a teenager, she was a natural leader.  Despite her petite size, she stood tall when there was a need.  That ability has been used in her work and life of service to her church families.  She was held in high regard by all who knew her.

She was born only a few blocks from down-town Greenville.  Attending school there, she was taught secretarial skills.  After graduation, she worked for the McDuffie Parker Furniture Company.  She retired after 17 years as head bookkeeper and office manager.  Later, she used those skills for the family Promotional Advertising company.   She kept the books and her family straight.

After retirement, she and her husband, Jack,moved to Newberry where her daughter and grandchildren lived. Jean became active in the Newcomers Club and the Parks and Recreation Senior Group where she made several new friends.  After joining the First Baptist Church, both she and Jack became active with seniors, a work that they had done at other churches.  They were asked to serve on a new committee that resulted in the creation of the 50+ Fellowship, a ministry to area seniors.

From an early age, she has always been strong in her faith and service to the Lord.  As the years passed, she worked with children, youth, young adults, middle age and senior adults.  She always gave every work her best efforts.

Jean was active in sports and was the catcher on a women's softball team.  An avid bowler, her senior

team won their league championship for several years in a row.  She was disappointed that there was no place to bowl in Newberry.  Her packed bowling bag is a testimony of her love for the sport.  Being very competitive, she wanted to succeed in everything attempted.  That included her cooking.  Her goal was to see that no one who came to her home, went away hungry.

Jean's health declined but her faith never faltered.  Even in the past year, she was overheard praying in her sleep.  She thanked God for His blessings and asked for help with her memory.  Her faith was strong until the very end. She was an example to all who knew her.

Her old self is like an empty cocoon ; her spirit has been set free and has taken a glorious new form.  We can take consolation in the knowledge that she is in the hands of God and is waiting for our arrival.  All are invited to join her there.

John 3:16 KJV For God so loved the world that He gave His only begotten son that whosoever believeth in him should not perish, but have everlasting life.

Funeral services will be held at 11:00 am Thursday, June 9, 2022, at the First Baptist Church by the Rev. Dr. Albert Allen. Burial will follow at 3:00 pm in Woodlawn Memorial Gardens in Greenville. Visitation will be Wednesday from 6:00 – 8:00 pm at the McSwain-Evans Funeral Home. Memorials may be made to the First Baptist Church Relocation Fund, 1020 Boundary Street, Newberry, SC 29108.

Honorary pallbearers will be members of the Friends in Faith Sunday School Class.