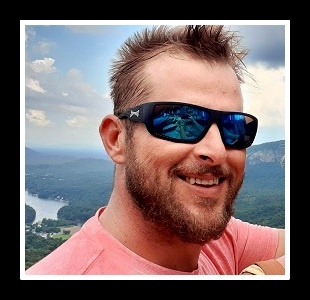 He was a graduate of Mid Carolina High School and Piedmont Technical College.

Jeremey served in the Army during the Iraq War from 2006 to 2009 as a Combat Engineer (E4) and was honored by General Petraeus with a Compat Action Badge.

Jeremey was a member of Macedonia Evangelical Lutheran Church. He was involved with the ministries of the Faith Home in Greenwood. His passion for animals had him actively involved in CORA (Community Organization Rescuing Animals). He was a member of Greenwood Toast Masters. He was an avid SC Gamecocks fan.

He was engaged to and fiercely devoted to his fiancé, Anna Hendrix of Greenwood, SC He is survived by his parents, Charles Martin (Karen) Schumpert and Cynthia F. Brown; sisters Summer (CJ) Banks, Chelsea (James) Lawrence, Emily Widener; his maternal grandparents, Tommy and Janet Brown; an Uncle Paul Brown and wife Tammy; nephews Dominic and Kash Banks. Jeremey was predeceased by his paternal grandparents, Charles Schumpert and Gail Guay and a brother, Matthew Schumpert.

A graveside service will be held at 2:00 PM on Saturday, October 24, 2020 at Macedonia Evangelical Lutheran Church Cemetery located at 49 Macedonia Church Road, Prosperity, SC 29127. The family will receive friends at the Lakeside Worship Center located at the church.

Donations in his memory may be given to CORA, 105 Poplar Hill Road, Ninety Six, SC 29666 or to McSwain-Evans Funeral Home toward his funeral expenses, 1724 Main Street, Newberry, SC 29108.

Family and friends may come by the McSwain-Evans Funeral Home at 1724 Main Street, Newberry, SC 29108, Friday between the hours of 9:00 AM and 5:00 PM to sign the guest register and pay their respects.