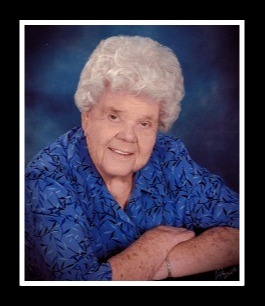 Marie Warren, 91, of Prosperity, left this world and entered heaven's gate October 5, 2017. She was surrounded by her family whom have been blessed to have had her in their lives.

She was born in Houston, MS on December 17, 1925 to Irene and James Binkley. She married George W. Warren in Denver, CO on December 24, 1950. Mrs. Warren was a member of First Baptist Church, Newberry.

Marie's occupation was serving others. She volunteered her time while living in Denver in various nursing homes. Once she and her husband moved to Souder, MO in 1981 she became very active in her church and community. She moved to Newberry in January 2008 to be closer to her family. She was a resident of Springfield Place until June 2017. Mrs. Warren crocheted many baby blankets that she donated to Newberry Hospital for the newborns.

Funeral services will be held Sunday, October 8, 2017, at 3:00 pm at First Baptist Church by the Rev. Dr. Albert Allen and Rev. Dr. Kenneth Harmon. Visitation will be one hour prior to the service. In lieu of flowers the family requests donations be made to Hospice Care of Tri-County, 180 Commerce Drive, Newberry, SC 29108 or to the Wounded Warriors Project.

She was loved by all who knew her and will be greatly missed.

She will have a graveside service at Harlow Cemetery in Mountain View, MO.