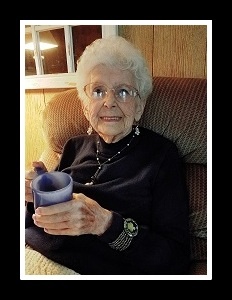 Marjorie Smith, 93, of Newberry, widow of Scott Smith, passed away peacefully at home on Wednesday, April 8, 2020.

She is survived by her children, Tim (Debby) Smith of Carlisle, Kentucky, John Smith of Oregon, Theresa (Ron) Halfacre of Newberry and a daughter-in-law, Eileen Fitzpatrick of Eminence, Kentucky.

Marjorie’s father was born in Russia and served with the US Army during World War I.

Marjorie spent much of her childhood on a small farm in East Lansing, Michigan. She loved caring for farm animals, especially her horse, Blind Bob.

Marjorie worked in the 1940’s as head usherette at The Gladmer Theater on Washington Avenue in Lansing, Michigan.

After marriage, Marjorie and Scott enjoyed traveling to National Parks, Hawaii and the Bahamas. They lived in Michigan, Colorado, New Mexico, Ohio, and Illinois before moving to South Carolina. Family vacations with their children were spent in Mackinaw City, Michigan, visiting with loved ones and waking to the loons on Lake Michigan.

Marjorie excelled at math and after years of being a homemaker and raising her children, she worked as a bookkeeper for Dun and Bradstreet in Naperville, Illinois.

Marjorie was punctual and tried to pass along those good attributes to her children. She was a good cook. Her patience was unmatched. She was both stern and tolerant. She didn't discuss politics or religion and was very secure in her faith. She refused to argue - with anyone. She was kind-hearted and good natured.

Prior to Macular Degeneration and losing most of her sight, she was an avid reader, completed hundreds of crossword puzzle books, and played nightly games of Scrabble. Keeping her mind active proved helpful in her later years. She was smart, clever, and quick with humorous one-liners.

Marjorie preferred to be independent and never desired to re-marry after Scott died in 1994. Not one to keep still, she kept active by selling one home only to buy another, mostly within Newberry County, and twice to Kentucky.

She loved fine dining, rides through town, and trips to the hair salon, Merle Norman and Creative Styling. More than anything, she loved her family.

Her favorite color was yellow, and her favorite poem was Daffodils by William Wordsworth.

Minimal hearing, sight and mobility didn’t impair her positive attitude. Daily – with much effort and assistance – she got up and made the best of each day. She had a small “cottage” that served as her day room, adjacent to her daughter’s home by way of a patio filled with colorful plants and flowers. There, she spent her remaining years playing rummy, bird watching, and watching/listening to her favorite shows: NCIS and In the Heat of the Night. She continued activities until the last few days of her life, when she said her body was exhausted.

She was grateful to her caregivers over the past five-years, especially fulltime caregivers Brenda Floyd, BJ Beard, her children, Theresa and Ron, and part-time caregivers, Susan Pace and Geri Pratt. Every day she was told she was beautiful. She was a neat dresser and well groomed, and always wore her earrings and lipstick. She had a modest and yet extraordinary lifestyle for which she was grateful.

In addition to her immediate family, she is survived by grandchildren, great-grandchildren, nieces and nephews, her devoted pet, Ruby, and friend of over 30-years, Mamie Burnside.

The family gives thanks to Dr. Mark Davis and Internal Medicine for over 30-years of love and care, Dr. Michael Bernardo and Bernardo Geriatrics Home Care for five-years of quality home care, and MSA Home Health and Hospice for their encouragement and support.

Marjorie was extremely blessed with long life and overall good health.   More than anything – and perhaps most importantly – Marjorie knew that she was loved. She said the happiest years of her life were her last years, and that’s the greatest gift most anyone can hope for.

Plans are to celebrate her life with family and friends this summer on her shared patio. Until then, thank you all for your unending support, and adding quality to her life.  We hope that she added joy to your life, as well.